Rating:
100%
(1)
This VSOP is a collaboration between Barcardi and Jay-Z, produced at the ancient cognac house Château de Cognac.
$59.99
Add to Wish List

The Otard family can be traced back to the mid 9th century, to a Norwegian warrior, Ottar. James O’Tard was created a Baron in 1701 after fighting alongside Louis XIV of France. His great-grandson, Jean-Baptiste Antoine Otard established the French Cognac house in 1795, in his name. The Château de Cognac he purchased was built in the tenth century to protect the villagers from Norman invaders.

The Cognac house has remained in the family ever since. Situated in the Cognac region overlooking the Charente, the historical Château de Cognac castle is the birthplace of French King François I, where cognac production has been taking place since 1796. The chateau was chosen largely due in part to its cellars, which provided unique properties for the aging of the cognacs. D’Ussé Cognac is a product of Bacardi that is produced at the Chateau de Cognac. Released in June of 2012, in New York, D’Ussé is a collaboration with hip-hop mogul Jay-Z.

D’Ussé VSOP is made from a blend of eaux-de-vie from the four of the Cognac crus: the Grande Champagne, Petite Champagne, Borderies, and Fins Bois. The youngest of the eaux-de-vie in the blend is at least four years old. Naturally aged in the Château de Cognac cellars.

This VSOP is a bold flavored, full-bodied, aromatic blend with a lot of complexity. It features woody and spicy cinnamon tones from its aging in dry cellars, followed by a smooth round finish, which is due largely in part to the humid aging conditions. This is a balanced blend of eaux-de-vie from numerous cellars of the chateau, which come together to form a truly harmonious Cognac. D’Ussé VSOP is bottled in an elegant vile, emblazoned with a medieval, regal golden double cross.

Get your bottle today! 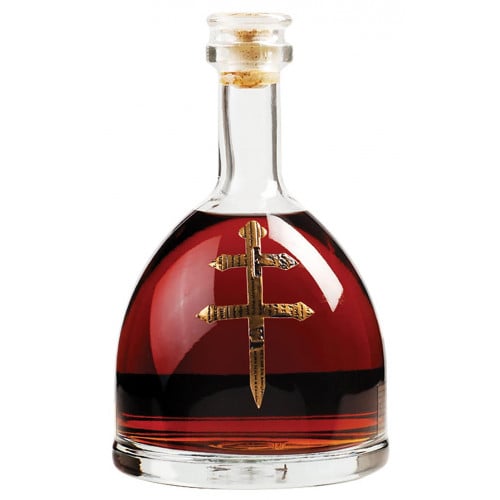