Be the first to review this product
This Spanish Brandy has received countless accolades including Gold medals at the San Francisco Spirits Competition and International Spirits Challenge.
$144.99
Add to Wish List

The House of Torres was founded in 1870 by Jaime Torres Vendrell, but their history dates as far back as the 18th century when the Torres family bought their first vineyard in the Penedès region. The resilient House of Torres established itself as one of Span’s leading wineries, producing some of the finest Spanish Wines in the country. Based in Barcelona, the family began producing brandy in the 20th century.

The brandy is named “Torres 30 Jaime” in honor of the founder Jaime Torres, the “30” refers to the average age of the brandies in the blend. The brandy is comprised of several Parellada wines, aged in American oak casks. For the final blend, several soleras chosen from among the oldest in the Torres cellars. There are several grape varieties used in the blend, but the majority of the blend is the famed Parellada grape — a regional variety that Bodega Torres is well-known for.

The nose offers aromas of dried fruit and nuts (toasted hazelnut) with hints of vanilla and toffee. The plate is well-balanced, smooth and decadent. Packaged in a distinctive, artistic decanter, this brandy is fragrant and decadent. Not to mention, highly decorated. The Spanish spirit received a Double Gold medal at the 2016 San Francisco Spirits Competition, and Gold medals at the 2017 International Spirits Challenge and International Wine & Spirits Competition.

Pick up your bottle today!

Noble dark mahogany in color. The nose offers aromas of dried fruit and nuts (toasted hazelnut) with hints of vanilla and toffee. Round and smooth on the palate. The spiced, sensual power imparted by oak aging distinguishes this very old brandy. Impressive persistence and balance. 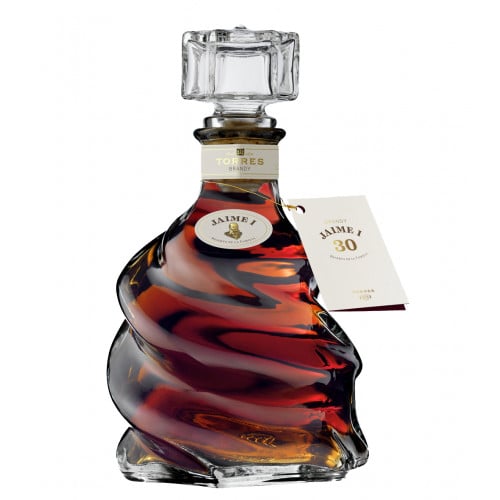