Be the first to review this product
This incredible indigenous Bolivian spirit is the first of its kind to be distributed in the United States. Impeccably clean taste…”
Paul Pacult
$32.99
Add to Wish List

Singani is an indigenous Bolivian spirit that has been produced since 1530, and distributed exclusively inside Bolivia. Fast forward to 2008, Steven Soderbergh attended a kickoff party in Madrid for the 2008 biopic Che. The casting director of the film gave him a taste of Singani, an aromatic, clear grape-based Bolivian spirit. The rest was history.

Singani uses only muscat grapes of Alexandria which must be planted at a minimum of 5250 feet. Because Singani is not a recognized spirit category in most of the world, it is described as a brandy, but is better classified as an eau-de-vie. Singani has been described as being much like pisco, and came about when the Spanish brought their grapes and their distilling methods over to Latin America. Five hundred years later, it's the national drink of Bolivia with a Domain of Origen, and yet still mostly unknown outside the country.

In 2010, Steven Soderbergh created his own line, Singani 63, to be distributed everywhere outside of Bolivia. In November of 2014, he co-petitioned (with the Bolivian government) to the U.S. Alcohol and Tobacco Tax and Trade Bureau to recognize Singani as its own unique category, not unlike Pisco and Cachaça. The number 63 is a reference to Soderbergh’s birth year, and this Singani is the first ever to be available in the United States and for that you can thank the director, Steven Soderbergh and his blood, sweat, and tears (and money).

Pick up your bottle today!

Light aromatic floral notes and grapes, white pepper and an herbal essence on the palate. The finish is blunt, light, and clean. 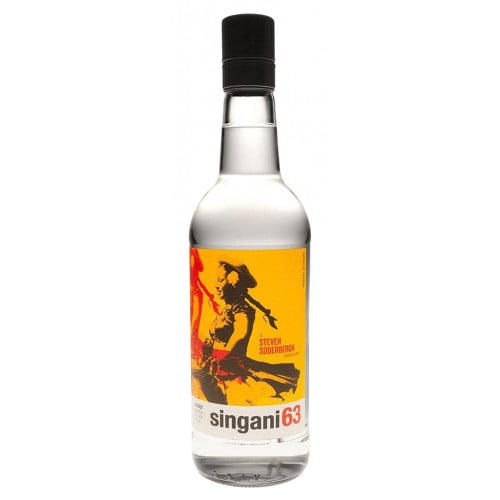