Rating:
100%
(2)
This whisky, which is aged in both American and European Oak, was called "one of Speyside’s definitive malts" by Paul Pacult.
$59.99
Add to Wish List

During the early 19th century, illegal distilleries were commonplace throughout the Speyside region of Scotland. In 1823, however, Alexander Gordon pushed the Excise Act of 1823 through Parliament. The Excise Act allowed illegal distillers throughout Scotland to apply for and obtain licenses to legally distill spirits. In 1824, a businessman named George Smith applied for one of the first licenses in the Speyside region of Scotland and opened the doors to The Glenlivet Distillery. For nearly two centuries, The Glenlivet Distillery has been producing the "single malt whisky that started it all."

Glenlivet Single Malt Scotch Whisky is made using barley sourced from Crisp Maltings, Portgordon (Portgordon is a village in Moray, Scotland). After the barley has been malted and mashed, it is fermented in wooden washbacks for approximately two days. The wooden washbacks used by Glenlivet are more difficult and expensive to maintain as compared to the stainless steel washbacks used by most Scottish distilleries, but impart a distinctive, floral quality to the whisky.

After the barley has been fermented, it is distilled twice — first through Glenlivet’s wash still, and then again through Glenlivet’s spirits still. Originally designed by George Smith, the copper-pot stills have a unique, lantern-like shape, which encourages contact between the whisky and the copper. The copper strips the whisky of any impurities it may have, and provides for a lighter and more pure flavor profile.

Following distillation, The Glenlivet 12 Year Old Single Malt Scotch Whisky — part of Glenlivet’s Classic Range — is matured in a mixture of cask types, including American Oak and European Oak. In particular, the American Oak lends the whisky its vanilla character and distinct smoothness, while the 12 years spent inside both barrels gives the whisky aromas of honeysuckle and summertimes fruits, along with notes of fresh pineapple and bitter cocoa on the palate. The whisky has a rich, creamy finish filled with lasting touches of hazelnuts and marzipan.

Pick up a definite malt of your own today!

Aromas of honeysuckle and summertimes fruits, along with notes of fresh pineapple and bitter cocoa on the palate. Rich, creamy finish filled with lasting touches of hazelnuts and marzipan. 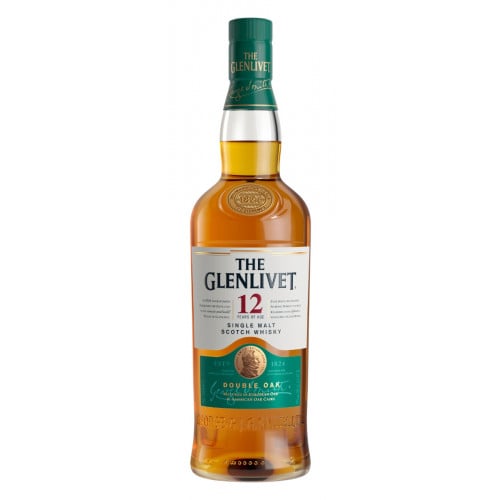